Many of you will know the story of the tragic figure, Samson, the biblical character whose prodigious strength could defeat whole armies. Samson, however, also had a prodigious weakness–an attraction to foxy Philistine women. One of them, Delilah, asks him three times for the secret of his strength and three times he gives her a false answer. Each time she tells the Philistines, but when they try out what Samson has said, he breaks free.

The fourth time Delilah asks, Samson tells her the truth that lies behind his great strength–he has never cut his hair. Sure enough, while he’s asleep, Delilah lops off his hair, the Philistines attack, blind him and put him in prison. How, when Delilah has told the Philistines the other three answers, could Samson be so stupid as to tell her the real secret the fourth time? 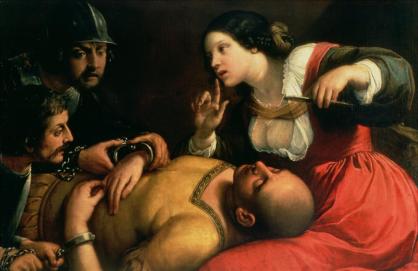 I believe the answer has to do with what I wrote about in my last post–the human ability to step back and reflect before taking action. As we delve deeper into the story, it appears that Samson lost this inner space which in turn led to his tragic downfall.

First, let’s look at a Hebrew word, mezimmah, that is sometimes used for this planning or decision-making faculty. One commentator describes it as “the capacity for private, hidden thought”–space for freedom and creativity. We all have it and we can use it either positively or negatively. In the latter case, mezimmah is translated evil devices or wicked schemes (e.g. Psa.37:7). The manipulative individual steps back into his own thoughts and schemes how he might get his way. On the other hand, mezimmah can be positive at which times biblical translators use words such as discretion or prudence (e.g. Prov. 2:11). Wise people step back and choose paths that are good, peaceable, loving and healthy.

In the Bible spaciousness is seen as a blessing from God and when we invite God into our inner world, he increases the space inside for free, uninhibited thought. Conversely, shutting God out reduces it. The NIV’s usage of mezimmah in Psalm 10:4 illustrates the power we have to decrease this space. “In his pride the wicked man does not seek him; in all his thoughts there is no room for God.” Only when we make room for God in our thoughts will we ultimately have this wonderful sense of freedom. He is the One who created us with the precious ability to choose and he wants us to have it. He doesn’t want this capacity minimized by unruly passions or desires, fears, stress, anxiety, pressures from other people or anything else.

This brings us back to Samson who stands out in the Bible as someone whose lust for illicit sexual relationships crowded out his capacity for rational thought. As he gave himself over to Delilah, his thought-life became breached. Here’s the description of the beginning of Samson’s end when he tells Delilah his secret. “It came about when she pressed him daily with her words and urged him, that his soul was annoyed to death. So he told her all that was in his heart. . .” (Judges 16:16,17a).

The Hebrew word translated pressed is often used for what an enemy does to a city as it lays siege to it. It is also translated constrain, bring distress, oppress. Delilah besieged Samson. She bombarded him with her words and she did it relentlessly until he was hemmed in, “annoyed to death.” The word translated annoyed means to be inadequate or to not have enough of. The literal meaning is to be short as when a bed is not long enough to be comfortable. Delilah pressed in upon Samson until he ran out of inner room.

Samson had a history of involvement with prostitutes and other inappropriate relationships. As he continued to give himself over to illicit sexual pleasure, he opened himself up to a relentless spiritual onslaught. The turmoil thus experienced robbed him of space for reflective thinking. He lost the ability to make a rational decision.

Samson vividly illustrates Prov. 25:28, “Like a city that is broken into and without walls Is a man who has no control over his spirit. In our next post we’ll take a look at the “door” of the city and to whom we’re to open it.

View all posts by Andrew

5 thoughts on “A Little Lower than God! Part 3: How Could Samson be So Stupid?”